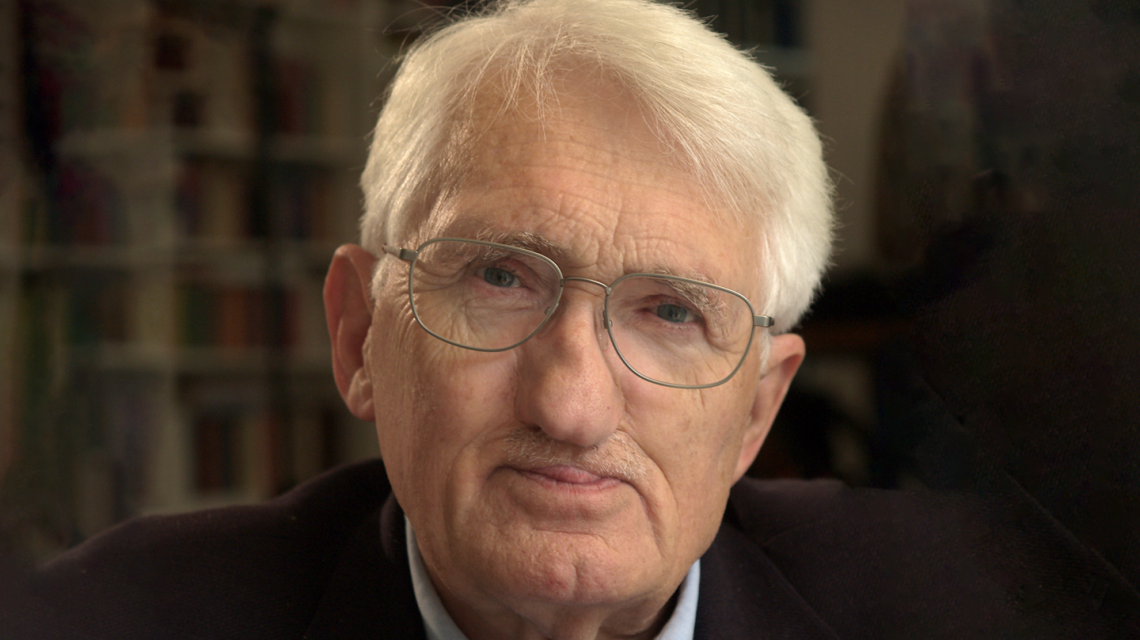 Jürgen Habermas (b. 1929) belongs to those contemporary Master Thinkers who cannot be unequivocally located within the customary division of academic disciplines. His works cover a broad field of human and social sciences: philosophy, ethics, social theory and sociology, political theory, law and legal theory. In addition, he has actively participated in German and, especially since the 1990s, European debates on issues which he himself defines as ethico-political.

Habermas is the leading second-generation representative of the Frankfurt school of critical theory. His background in critical theory accounts for one of the main uniting themes in his voluminous oeuvre : the elaboration, justification and application of a critical yardstick for assessing modern society. The perspective of critical theory has also provided direction for his more philosophically-oriented work, which follows the programme of reconstructing rationally the presuppositions of human communication and action and where the concept of rationality occupies a prominent position.

In his Habilitation thesis, The Structural Transformation of the Public Sphere (1962; Eng. ed. 1989), Habermas criticised modern society for not keeping the promises it had raised with the ideas of the liberal or bourgeois public sphere and the Rechtsstaat . His analysis ended with the pessimistic conclusion that the ideas of the liberal public sphere, general law and the bourgeois Rechtsstaat had lost their social foundation.

Habermas' 'linguistic turn', which can be dated to the late 1960s and early 1970s, led to the universalisation of the normative criterion, to its detachment from the structures of modern society. The ideal speech situation, which, according to Habermas, is anticipated in all human linguistic communication and which has an anthropological basis in the human communicative capacity, could easily be interpreted as a universally valid norm of social criticism, as well as a justification of and a model for a society based on freedom and equality.

However, Habermas soon rejected the idea that the ideal speech situation could be understood as defining the ultimate aim of social emancipation. He had learned from his discussion partner Niklas Luhmann that social evolution manifested a constant growth in the systemic complexity of society. Therefore the transparency which would be required by the ideal speech situation, interpreted as an all-embracing organisational principle for society, could not function as the critical yardstick of social theory.

In his The Theory of Communicative Action (1981; Eng. ed. 1984/89), Habermas introduced the social theoretical distinction between the life-world ( Lebenswelt ) and the System. He based this distinction on the differentiation of social action into communicative and strategic action, as well as on the corresponding differentiation of the social and the systemic integration of society. Habermas' diagnosis of the problems plaguing contemporary society is known as the thesis of the colonisation of the life-world. The danger consists of systemic mechanisms invading the life-world, of money and administrative power replacing mutual solidarity and linguistically-mediated understanding as the integrative mechanisms of the life-world.

After The Theory of Communicative Action Habermas turned his attention to moral and legal theory. He made a major contribution to the theory of discourse ethics ( Moral Consciousness and Communicative Action , 1983, Eng. ed. 1990). He soon realized the need to complement the discussion of modern society's moral structures with a legal-theoretical approach. In its legal-theoretical chapters, Between Facts and Norms (1992, Eng. ed. 1996) provides a discourse-theoretical account of modern law. It also proposes a solution to the problem The Theory of Communicative Action had left open. Now the law - democratic law-making procedures and the communicative power engendered through them - is assigned the task of disciplining the System. Between Facts and Norms in a way returns to the themes of Habermas' Habilitation thesis. The democratic Rechtsstaat is there to contain the exercise of administrative power, and its basic principles, along with fundamental human-rights principles, also provide the critical social theory of modern society with normative yardsticks.

In political theory, Between Facts and Norms elaborated the notion of deliberative democracy. In his subsequent writings, Habermas' focus has been on the trans-national level. He has made important contributions to the on-going discussion on the possibilities and forms of trans-national constitutionalism, democratic Rechtsstaat and deliberative democracy, while also continuing his more philosophical explorations. In addition to being an exceptionally versatile academic writer, he is also an outstanding example of a modern intellectual who is conscious of his specific responsibilities in the public discourses forming the core of deliberative democracy.