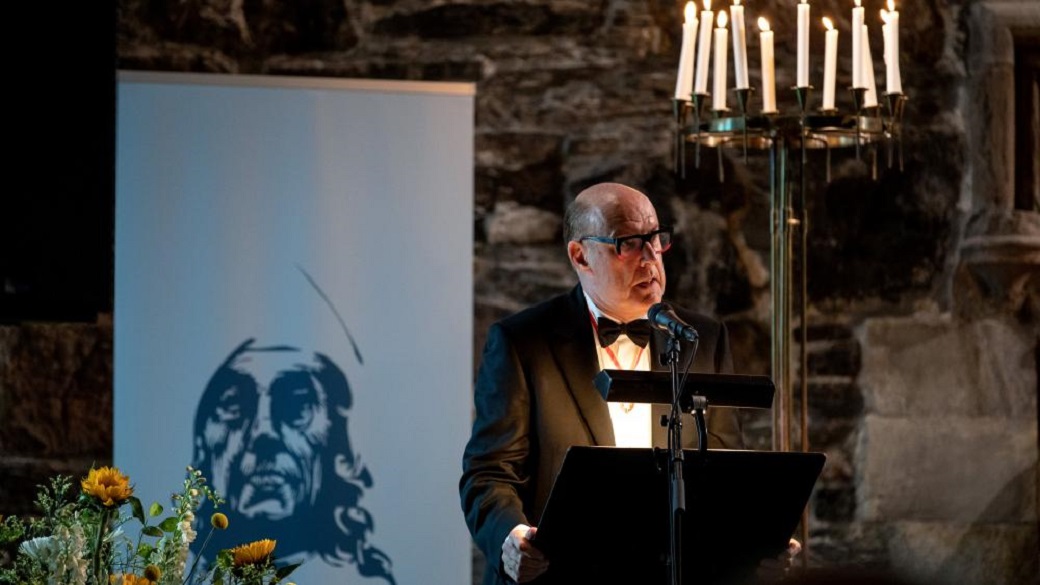 The Holberg Prize is very pleased to publish the speech delivered by Sir David Cannadine, President of the British Academy, at the 2019 Holberg Banquet.

We are here this evening to mark and to celebrate the award of a great prize – in the fields of the humanities, the social sciences, law or theology – to a great scholar – namely Paul Gilroy.  And it is no coincidence that these are exactly the fields of scholarship and learning that the British Academy exists to champion, proclaim and promote, and I note with delight that of the sixteen winners of the Holberg Prize so far, four have been Fellows of the British Academy, namely Ronnie Dworkin, Marina Warner and Onora O’Neill before Paul Gilroy, and a further eight have been corresponding Fellows of the Academy, based in North America or Europe.  It’s good to keep these things so much in the extended Academy family, this is a record of which we are very proud, and we hope that the judges of the Holberg Prize are equally pleased at this high degree of convergence and alignment.

I should also like to take this occasion to applaud and acclaim the Norwegian government for so imaginatively establishing and for so generously funding the Holberg Prize, which even in the relatively short span of its existence, has already become one of the great and most coveted trophies on the international landscape of scholarly awards and academic honours.  There is, indeed, something particularly heartening about the fact that twice a year, with the Holberg Prize and the Nobel Peace Prize, Norway gives itself over to honouring and celebrating those men and women who have enhanced and enriched our lives, by opening up new perspectives on what it means to be human, and by working to promote humanity’s most precious and priceless goal, namely peace itself.

In celebrating the Holberg Prize, we are not only acclaiming the work of a great scholar, as the Minister for Research and Higher Education has made abundantly plain in her fittingly eloquent reibute and appropriately admiring appreciation: we are also here to proclaim and to reiterate the values and the verities that lie at the heart of the humanities, the social sciences, the law and theology, namely evidence-based research, cosmopolitan learning, free trade in ideas, liberal internationalism, and tolerant and enlightened humanism.  And whatever the naysaying American president may assert to the contrary, you simply can’t trump that, or trump them.

These are the values which, at their best, our two countries have long espoused and proclaimed.  In London’s Hyde Park you will find what is rightly called the Norwegian Stone, which records your country’s gratitude for Britain’s friendship and support during the Second World War, in ‘our common struggle for freedom and peace.’  In 1945, it may have seemed that, in Britain and Norway, that struggle was over: that freedom had been safeguarded and peace secured. Hence the Christmas tree that the city of Oslo has given each year since 1947, on behalf of the people of Norway, and which is set up in Trafalgar Square – not far, as it happens, from the headquarters of the British Academy in Carlton House Terrace.

Yet despite the wishes, aspirations and conduct of many ordinary people throughout human history and around the globe today, ‘freedom and peace’ are not the default mode of human society and human existence: on the contrary, they have to be constantly worked at, persistently pursued, and deliberately made to happen. For, as Edmund Burke once put it: ‘the only thing necessary for evil to triumph is for good men to do nothing.’  From Rwanda to Northern Ireland, from Indo-China to Bosnia, peace has to be brought about, through the focussed labours and deliberate political acts of men -- and we would now add, of women, too -- so as to ensure that evil does not triumph.

It is, then, wholly fitting that in his most recent work, Paul Gilroy has begun to explore the challenging question of how we might better try to live together, how we might deepen democratic institutions and defend democratic habits, and how essential are the humanities, the social sciences, the law and theology to the understanding of these aims and the achievement of these objectives. Science and medicine and technology may often drive change, but so do ideas generated by our subjects, ranging from feminism to human rights; and if we are to make sense of the world in which we live, and to manage change, then the humanities, the social sciences, the law and theology are not optional extras: they are absolutely essential, as they always have been, to our contemporary well-being and self-understanding.

One of the reasons why we know about some of these matters is that much of Paul Gilroy’s work has been devoted to exploring and making plain some of these many and multifarious, interlocking and interconnected hierarchies of inequality. And if inequality is to be lessened, and opportunities improved, then his work, along with that of many other practitioners in the humanities, the social sciences, the law and philosophy, is crucial to those endeavours. Just as peace has to be worked at, so does the reduction of inequality and the promotion of freedom. For, as Eric Hobsbawm once observed, ‘the world will not get better on its own’, and it certainly won’t get better without the active engagement of scholars in the subjects we profess.

There is, then, as close a connection between the Holberg Prize and the enhancement of freedom as there is between the Nobel Peace Prize and the promotion of the amity of peoples and the comity of nations.  It is to Norway’s credit, and indeed to its lasting glory, that you give time and effort and support to these great causes and high endeavours, by providing such splendid forms of recognition and acclaim. Paul Gilroy deserves all the recognition and acclaim that you are giving him and bestowing on him; and long may the Holberg Prize, and the subjects it champions and proclaims, thrive and prosper and flourish.

Sir David Cannadine is Dodge Professor of History at Princeton University and President of the British Academy. The speech was delivered at the Holberg Banquet, Haakon's Hall, Bergen, on 5 June, 2019. The Banquet was held in honour of 2019 Holberg Laureate Paul Gilroy.