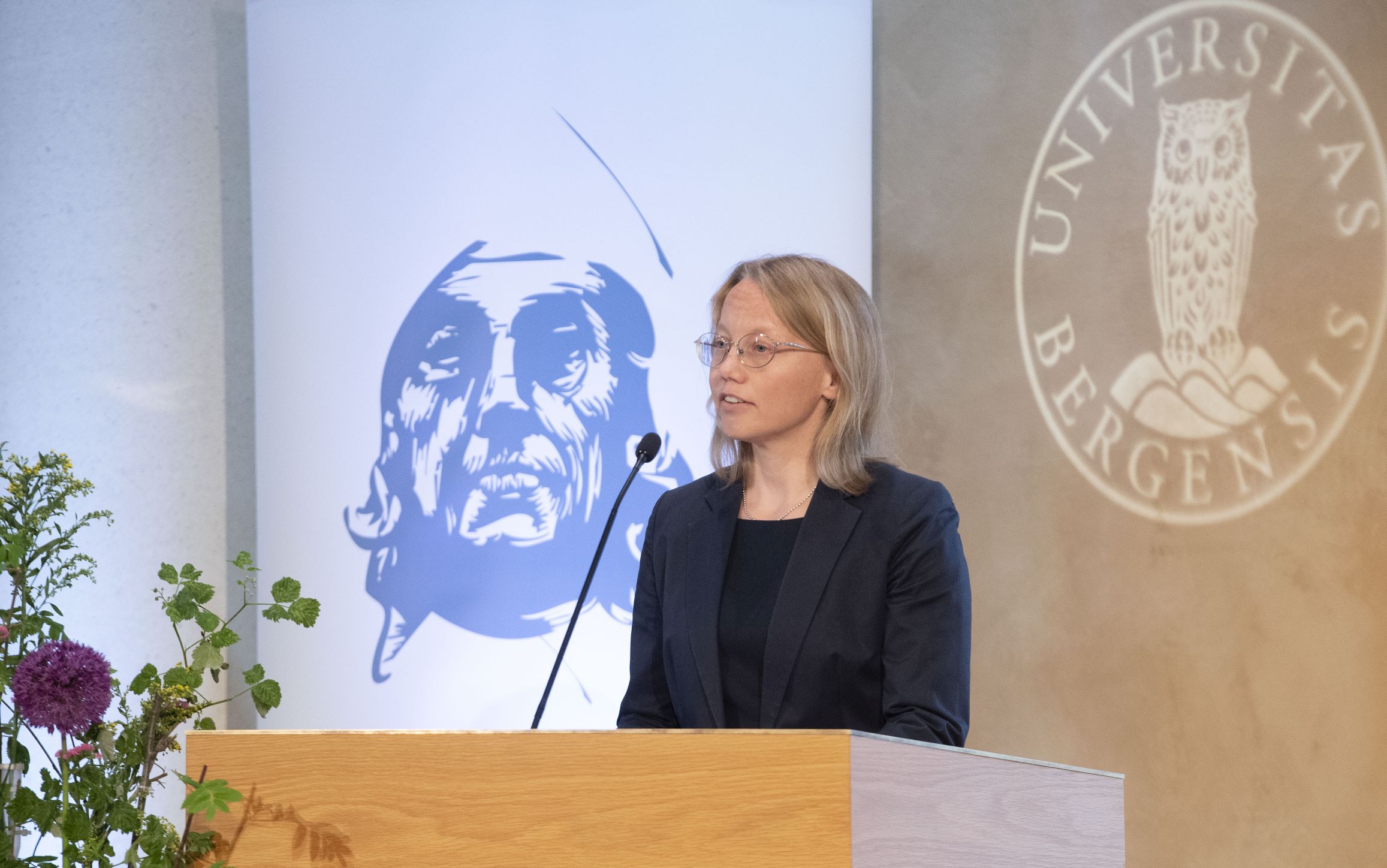 It is an unimaginable honour and a source of joy to join the ranks of Nils Klim Laureates today. I express my sincere gratitude to all who nominated, recommended, and awarded me. I also thank those who established the Nils Klim Prize in the first place. I interpret its very existence as a powerful recognition to all of us investigating the diversity and richness of human culture, whether in the past or in the present. It is an exceptional acknowledgement of the significance and validity of our research areas. The Nils Klim Prize signals that they carry value in our societies and belong to the heart of the academic enterprise, as they have done ever since the medieval beginning of the university institution when theology, philosophy, and law played a decisive role in the curriculum.

It was not easy for me to choose what to study, as I felt that all lines of inquiry would open up new vistas to be explored. Yet I decided to begin with the study of religion and theology to figure out some aspects of what it is to be human, just as Ludvig Holberg had done some three hundred years earlier. Along with this choice, I ended up reading ancient texts requiring me to learn one language after another. Aside from languages, I learned about worlds that are both lost to us and still vital in that cultures and traditions building on them continue to be generative around the globe.

My choice was rather intuitive but one that I do not regret. I agree with Henry Thoreau, who writes in his Walden (1854) that “[i]t is worth the expense of youthful days and costly hours, if you learn only some words of an ancient language … the adventurous student will always study classics, in whatever language they may be written and however ancient they may be.”  I have gained much from the exercise of deliberate reading, even if “the customs of the day” do not always see its value and “[m]en sometimes speak as if the study of the classics would at length make way for more modern and practical studies,” as Thoreau observed.  While the study of ancient texts is laborious, it is also a delightful task, inviting us to reconstruct past literary cultures and social realities. Yet ancient texts are more than mere relics; they can serve as conversations partners as we navigate our lives as individuals and communities in the 21st century. Thus, I was glad to read that the Nils Klim committee appreciates the ways in which my studies of antiquity relate to contemporary concerns.

Recently, I have begun to investigate experiences of both forced and voluntary relocations in antiquity. The authors speak of gaining knowledge through travel, depict fears and anxieties arising from movement, warn against travel as a cure for discontent, and draw attention to its socioeconomic aspects. They show how travel both facilitates and destroys things, for instance, by enabling access to new immaterial and material resources and by disrupting social ties or patterns of everyday life. These issues also colour Holberg’s narrative about Nils Klim, who explores the depths of the earth, discovering ways of living that fill the itinerant wanderer with both awe and otherness.

I am glad that we could travel here today, though I do not take it for granted after the pandemic experience. Yet our moves do not depend only on open borders or valid certificates. As for my journey to Bergen, I am indebted to webs of interdependence and interaction that have enabled it. The list begins with my parents, who endorsed my curiosity as a child, and continues with my teachers, advisors, colleagues, and co-authors, who have stimulated my thinking and thought with me. In my mind are especially those in Helsinki, who helped me grow into a scholar, and my colleagues in Aarhus, who believed in me and gave me a tenured job after years of uncertainty. Special thanks are due to my students, who teach me every day with their questions. Finally, I am grateful to Stephen, who has been willing to relocate because of my precarious academic aspirations, always approaching new countries, cultures, and languages with the curiosity of a true explorer such as Nils Klim. I thank you all.

The speech was delivered at the University Aula in Bergen on 9 June, 2022. The Nils Klim Prize was conferred upon Associate Professor Sheila Jasanoff by Norwegian Minister of Education and Higher Research Ola Borten Moe.