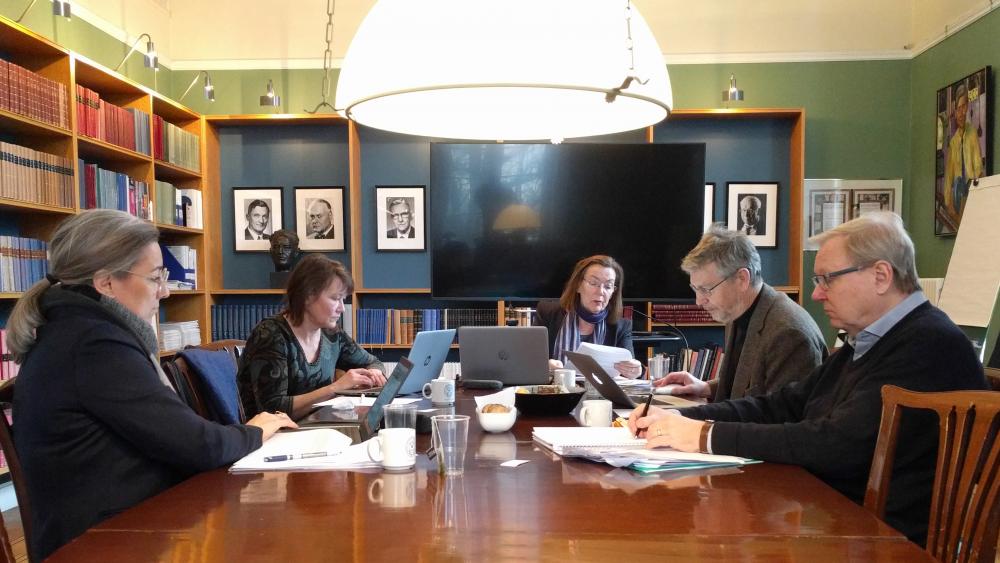 The Nils Klim Committee met in Stockholm on 21 January for a final round of deliberations before deciding on their recommendation for the 2019 Nils Klim Prize Winner.

The Nils Klim Committee held their annual meeting on 21 January, at the Royal Swedish Academy in Stockholm. After thorrough discussion of this years shortlist candidates, the committee have now decided on their recommendation for a 2019 Nils Klim Prize winner. With highly qualified candidates from very different adacemic disciplines their work has been challenging. Their recommendation will be presented to the Holberg Board in mid February and the official announcement of the Holberg Prize 2019 and the Nils Klim Prize 2019 will take place at Media City Bergen, on 14 March, at 9:00 CET. The event will be live-streamed from the Holberg Prize website.

To ensure that all candidates get a thorrough and fair evaluation the Nils Klim Committee will always have members from different nationalities and academic backgrounds. The five  members are all awknowledged scholars from the humanities, social sciences, law or theology, one from each of the Nordic countries. The members are elected for three years at the time, and can be reelected once.

Tone Sverdrup has assumed the role as committee chair, after former leader Frans Gregersen retired from the committee last year. She is a professor at the Department of Private Law, at the University of Oslo. The danish representative, Dorthe Staunæs also attended her first committee meeting in Stockholm. Staunæs is professor in social psychology at the Danish School of Education in Emdrup.

Keskitalo on the challenges of climate change policy adoptation

At the same night as the committee meeting took place, former Nils Klim Laureate, Carina Keskitalo, was invited to hold a lecture at the Royal Swedish Academy. Keskitalo is professor in political science at Umeå University and received the Nils Klim Prize in 2007. At the reception she spoke about challenges we face as a society when implementing climate change adoptation, drawing on her resarch and also experience from her current role as a cheif scientific advisor to the EU. Keskitalo emphasised the need for integration across sectors and organisations to succed in implementing climate change adopation, and also how important it is to alos have imput from the social sciences and humanities in this work, if we are to cope with the challenges ahead.

Nominate a candidate for the Nils Klim Prize 2019

Scholars holding positions at universities and other research institutions, including academies, are entitled to nominate candidates to the Nils Klim Prize.  The nomination form for 2020 is now open. The deadline for nominations is the 15 June. The Nils Klim Prize is awarded to young Nordic scholars under the age of 35 years, for outstanding contributions in the fields of humanities, social sciences, law or theology.