Holbergsymposiet 2013: "From Economics to Ecology" 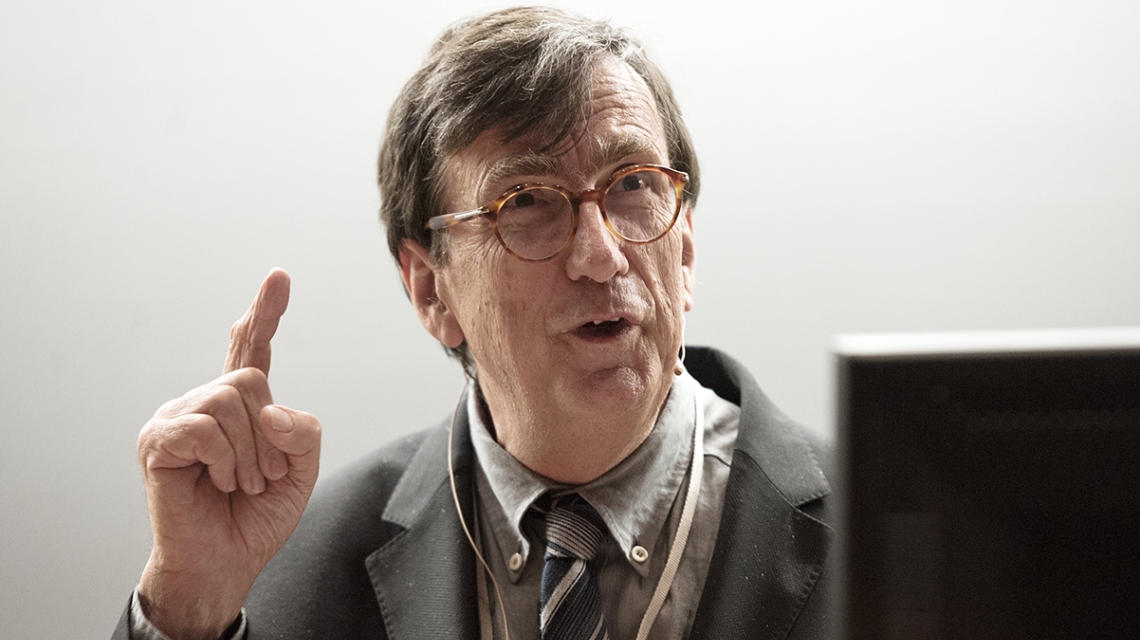 Holbergsymposiet i 2013 ble holdt til ære for Bruno Latour.

Roger Strand is Professor at and former Director of the Centre for the Study of the Sciences and the Humanities (SVT) at the University of Bergen. His main research interest is scientific uncertainty and complexity at the interfaces between science, technology and society.

1.  Barbara Czarniawska (GRI, School of Business, Economics and Law at the University of Gothenburg):

‘From sustainability to resilience: A change of wording or a change in thinking?’
The shift from focusing on sustainability to focusing on resilience can be seen as a simple shift in research fashions, or as connected to the recent financial crisis and the realization that sustainability costs money. It may mean that instead of moving from economy to ecology, most countries will be moving in the opposite direction. One way of opposing this shift may consist in moving from the focus on responsibility to performativity, which this paper explores.

Barbara Czarniawska is Professor of Management Studies at the University of Gothenburg, Sweden. She studies connections between popular culture and practice of management, and techniques of managing overflow in affluent societies as well as exploring techniques of fieldwork and the applications of narratology in social sciences. Her recent books in English include Cyberfactories: How News Agencies Produce News (2011) and Managing Overflow in Affluent Societies (edited with Orvar Löfgren, 2012).

‘The economization of Environment, and after’
The economization of environment is a program that started in the 1970s and that became the main way to frame the economics/ecology question in most countries and international organizations. Taking OECD as a privileged space of observation, I intend to show how notions of Environment and Economization were both matters of debate, how different conceptualizations and interests led to various tools and expert work – but also why they directly led us to the quite disastrous Anthropocene situation today.

‘Between two degrees and the rainbow’
We live our lives immersed in many different 'climates': intellectual, moral, political, economic.  Together they describe the overarching mood or temper of our times.  Yet we read the atmospheric climate as separate from culture--purified (as Bruno Latour might say)--and predictable.  'Two degrees' of warming, we are told by scientists--but no more!  This climate, too, is a signature of the wider moment we are in ('the signs of the times are always in the skies').  Instead of the abstract discourse of two degrees, I will stake a claim for weather talk and its intimate connection to the human imagination--'the rainbow' -as a more fruitful way for us to compose the future.  I include a reading of two of my weather poems.

Mike Hulme is Professor of Climate Change in the School of Environmental Sciences at the University of East Anglia (UEA), and is affiliated to the Science, Society and Sustainability (3S) Group in the School.  His book Why We Disagree About Climate Change (2009) was chosen by The Economist magazine in 2009 as one of its science and technology books of the year.  His next book, Exploring Climate Change Through Science and In Society, will be published by Routledge in August 2013.  From 2000 to 2007 he was the Founding Director of the Tyndall Centre for Climate Change Research and from 2007 he is the founding Editor-in-Chief of the review journal Wiley Interdisciplinary Reviews (WIREs) Climate Change.

The Holberg Lecture: 'Gaia: The New Body Politic'
The scientific notion of 'planetary boundaries' is not enough to redefine the new limits inside which the development of the human adventure should be, from now on, circumscribed. It requires to be supplemented by the other humanities disciplines that all have a say on what is a bond, a bound, a limit: namely, law, morality, politics, economics and religion. To succeed in making such a connection, a different definition of agency needs to be explored, one that also allows the natural sciences and the humanities to get much closer in their definition of what it means to be 'bound'.

Bruno Latour is Professor at Science Po, Paris, where he served as Vice-President for Research 2007-2012; since 2012 he has been responsible for the programme of Scientific Humanities and numerical methods. He was previously Professor at the Centre de sociologie de l’Innovation, École Nationale Supérieure des mines, Paris. His many books include Laboratory Life (1979), The Pasteurisation of France (1984), Science in Action (1987), We have never been modern (1991), Aramis or the Love of Technology (1992), The Making of Law (2002), Rejoicing, or the Torments of Religious Speech (2013), Reassembling the Social (2005), and On the Modern Cult of the Factish Gods (2009). A translation of his most recent book, An Inquiry into Modes of Existence (2012) is due out from Harvard University Press in 2013. His work has included two major international exhibitions, Iconclash; Beyond the Image Wars (2002) and Making Things Public (2005, with Peter Weibel). He is currently engaged in building AIME, a collaborative digital research platform supported by the ERC. He has received honorary degrees and medals from the Universities of Lund, Lausanne, Montreal, Bologna, Goteborg, and Warwick. His previous prizes include the Seigfried Unseld Prize (Frankfurt, 2008), the Kulturpreiz (Munich, 2009), and the Nam Jun Paik Centre award (2010); in 2012 he was awarded the French Légion d’Honneur.

Bronislaw Szerszynski is Senior Lecturer and Head of Department at the Department of Sociology, Lancaster University, UK, where he also works at the Centre for the Study of Environmental Change (CSEC).  His research focuses on the changing relations between humans, environment and technology, drawing on social theory, environmental history, qualitative sociological research, philosophy and theology. He is author of Nature, Technology and the Sacred (2005) and co-editor of Changing Climates, a special double issue of Theory Culture and Society (2010). His current research topics include the Anthropocene, climate geoengineering and discourses of techno-social transition to a 'green economy'.

Panel 2: Ecologies of the Anthropocene

Helga Nowotny is Professor Emerita of ETH Zurich in Social Studies of Science, and currently President of the ERC. She has held research and teaching positions in Vienna, Berlin, Bielefeld, Paris, Budapest, Zurich and Cambridge and has published widely in the field of Science and Technology Studies (STS). Her most recent book (with Giuseppe Testa) is Naked Genes. Re-Inventing the Human in a Molecular Age (MIT, 2011). Helga Nowotny is also a Foreign Member of the Royal Swedish Academy of Science and the Academia Europaea.

‘How to think about the stratosphere’
The stratosphere is a fundamental part of the earth system, and exerts a strong influence on human and other life on a number of timescales. But it is not amenable to normal modes of economic or ecological analysis. It does not contain resources, is not subject to property rights, is not a place of labour and contains no non-technological forms of life. It thus marks a boundary, not only for the biosphere, but for established ways of thinking about it.

Oliver Morton is a writer and editor who concentrates on scientific knowledge, technological change and their effects. He is currently an editor at The Economist; he has previously been a senior editor at the international scientific journal Nature and the editor of Wired UK; his writing has appeared in other outlets including The New Yorker, The American Scholar, and National Geographic. His book Mapping Mars: Science, Imagination and the Birth of a World (2002) deals with scientific and other ways of understanding a place that cannot at present be visited. Eating the Sun: How Plants Power the Planet (2007) is a study of the histories of photosynthesis. He is currently working on The Deliberate Planet, a book about geoengineering.

2. Adam Lowe (Factum Arte and the Factum Foundation for Digital Technology in Conservation)

‘Terra-Forming: Engineering the Sublime’
Adam Lowe will present a major installation scheduled to open on the Island of San Giorgio Maggiore during the 2015 Venice Biennale. A theatrical mixture of sculpture, performance, cartography and technology, this dynamic installation consists of a new projection based on topographic and bathymetric data made as a 3-D relief map that can be flooded with water from the lagoon. The exhibition does not propose simply to re-present our environment: rather, it insists on the processes through which it is performed and made and our dynamic relationship with our environment. The world is significantly an artifact, shaped through human agency, a claim that resonates with the scientific proclamation of the Anthropocene Epoch. The concept of the sublime was invented to make sense of things beyond our comprehension--things that freeze us with fear or act as a spur to action. It has a new role to play in the current managerial crisis of ecology and risk.

Adam Lowe is an artist and the founder of Factum Arte and the Factum Foundation for Digital Technology in Conservation. Research and investigation into the mediation and transformation of information is at the core of all Factum Arte’s work. He and a team from Factum Arte created the facsimile of the Wedding at Cana by Veronese for the Fondazione Giorgio Cini, Venice in 2007 -- widely acclaimed as a turning point in attitudes towards replication and preservation, and focusing on the relationship between authenticity and originality. In 2009 Adam Lowe was awarded the Microsoft prize for Les Humanities Scientifique by Science Po (Paris). Bruno Latour and Adam Lowe co-authored ‘The Migration of the Aura--or how to explore the Original through its Facsimiles’ for Switching Codes: Thinking through Digital Technology in the Humanities and the  Arts (Chicago UP, 2011).

‘Inquiry into Modes of Existence: the AIME project and the Anthropocene’
The Inquiry into Modes of Existence (the AIME project) is an exploration in content but also in the new techniques offered by 'digital humanities' for shared inquiry. Bruno Latour will present and discuss some of the advantages and downsides of those new techniques for participatory research and communication especially as they relate to the challenges facing earth-dwellers in the ‘anthropocene’ epoch: ‘the irruption of the “anthropocene”, because of the lack of other planets to spare, renders all the modernizing projects moot ....The Earth seems to be already occupied by another entirely different project that some have named Gaia and that no one, so far, seems able to reconcile with the plans made by those who are no longer exactly humans but rather Earthlings ... ‘ (Bruno Latour).